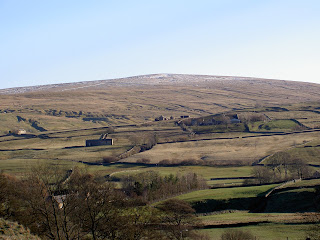 Looking down the dale from our house we can see Low Rigg, the home of my Grandma Scown's paternal grandparents. Thomas Elliott( b 1841) married Isabella Stobbs (b 1841) in Heatherycleugh Church in 1865. His mother, Hannah Elliott ( b 1818) was not married to his father John Emerson (b 1816) although they seemed to have taken an equal share in his upbringing, as they both appear with him on different Census records. John Emerson's mother Hannah was born in 1777 and appears on the 1851 Census.

Heather
I live in Cowshill, a village 383 metres above sea level in Co. Durham. I have lived here since 1980. Mark, our son, has a daughter Katie born in 2006. Susan, our daughter is married to David and they have Lucy, born in 2005 and Oliver born 2007. I have worked part-time in the hotel in the village since 1980, and during the last few years, when Mark and Susan became adults, I studied with the Open University and gained an BSc(Hons)IT; Computing, and later gained my PGCE with Sunderland University, and am now a Licensed Reader and ordinand in Durham diocese. I teach computer classes in the Community. I was born in Wolsingham and moved to Ireshopeburn in 1969. My dad's maternal ancestors came from Upper Weardale, the Elliotts, and tracing further back are Pearts from Rush near Cowshill and Emmersons from Wham near Wearhead. His dad was from Cornwall and moved to Weardale after WWI. My mam's family are from Willington and Close Houses near Bishop Auckland, although she was raised in Hamsterley.